Daily Job Search Advice from the CEO of Judged.com

The Lazy Manâs Way to Riches
By Harrison Barnes

The Lazy Man’s Way to Riches by Joe Karbo is one of the best-selling books of all time. You may have seen the advertisement for this book in Popular Science and other magazines in which it ran for years. The advertisement went into some detail as it described how Karbo rose from nothing and discovered a way to earn millions of dollars by working only a few hours per day. The advertisement began with the words ”I used to work hard…but I didn’t start making big money until I did less-a lot less. For example, this ad took about two hours to write. With a little luck, it should earn me fifty, maybe a hundred thousand dollars.”

What is most instructive about Karbo’s book, however, is how he sold it. The book was sold almost entirely through mail orders and one-page advertisements that he ran in magazines all over the United States. As many aspiring salespeople probably did, I purchased this book online when I was only about 18 years old. While I do not remember the book—it mainly contained a lot of motivational material—I did draw several lessons from the way the book was marketed that I think all good salespeople could benefit from:

Investigating the purchase of something is always more exciting than having the item at home. Karbo’s ad went into a great deal of detail about what his book could do for people. A big part of the excitement for any person purchasing something is the anticipation leading up to the purchase; people love to imagine what products will do for them. 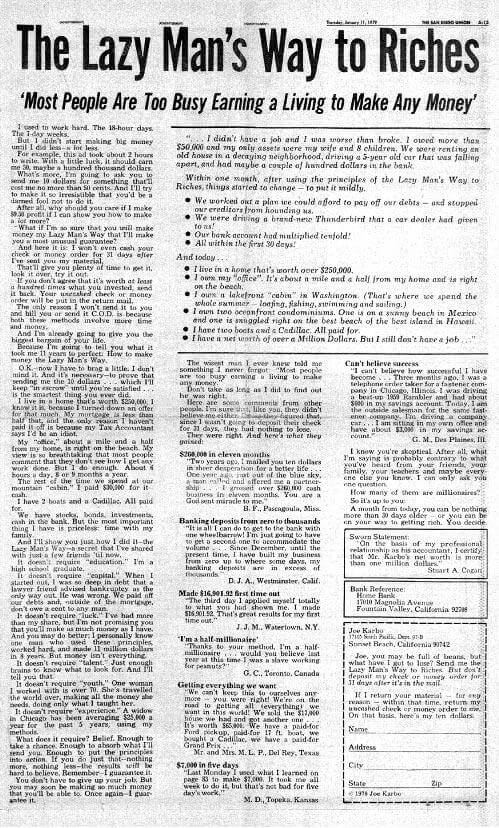 That is why Karbo’s advertisement was so effective. Getting people excited about a product is key for anyone. In fact, Karbo basically said nothing at all about what the book contained. All the magazine ad talked about was a secret, and Karbo promised to reveal this secret in his book.

2. Offer a Guarantee and Take Away the Risk.

Instead of the shopworn “money-back guarantee,” Karbo promised to hold the buyer’s check or money order without cashing it for one month. Every product or service should have an impressive guarantee. This is one of the most important aspects of any marketing program.

Jay Abraham also talks a lot about offering guarantees and how a guarantee is of the utmost importance. By offering a guarantee, you take skeptical buyers and bring them to a place where they are far more likely to purchase what you are selling. A guarantee is crucial and will motivate your buyer to buy more than you would expect.

3. Identify with Your Buyer.

Karbo’s ad contained a great deal of text in which he referred to himself as “a regular guy” just like the reader and went into considerable detail about how he was like the buyer. From the way he described himself, you could imagine him—and then imagine that you could be like him.

People generally purchase things from others who seem just like them. You need your buyer to identify with you at every turn. When buyers feel they are like you, they will be comfortable and less guarded than they otherwise would be. You need to make your buyer feel comfortable.

4. Do the Unexpected: Find Your Buyers Where They Least Expect You To.

Karbo’s book was advertised in the strangest places—Popular Science, TIME, and all sorts of other places where one would never expect to see a get-rich-quick book being sold. If you ask me, this was a brilliant maneuver. People were much less guarded when reading these sorts of magazines than they might otherwise have been.

Seeing an ad for Karbo’s book in one of these magazines was like seeing a penguin walking through the desert—you did not expect it. Our minds are trained to look for the unusual and different. People were not expecting to see this sort of product in these magazines. Whatever you are selling, you need to stand out and get your prospect’s attention. The one who gets the most attention generally piques the buyer’s interest.

You need to stand out from the crowd and be different.

5. Offer So Much Value the Offer Is Impossible to Turn Down.

Karbo’s ad essentially said, “For the cost of this book and in very little time, you can become very, very rich.” This was simply brilliant. Who in their right mind would not want to have something that could do this? If you could take the price of the book and multiply it by 1 million, then you would arrive at the actual value of the book—or so it seemed from the advertisements.

A good salesperson always leaves prospects with the impression that they would be nothing short of insane not to take advantage of the offer. This is what good salespeople do all the time. This is what you should do with every single product you sell.

6. Listen to Your Clients and Customers.

Karbo also offered to evaluate readers’ ideas in his advertisement and in his book. Apparently, Karbo received tons of letters in response to this offer. Being open to listening to one’s customers is a rare thing in sales. Most companies and salespeople think they already know what their clients want. Not Karbo. He stated that he was listening.

The ability to listen to customers is key and of paramount importance. You need to listen to your clients all the time. Simply listening is often enough to make the sale—being available to listen is hugely effective.

7. Do It Yourself! Take Action!

Many people would have waited for publishers to pick up their books before attempting to publish them themselves. Not Joe Karbo! Karbo self-published his book, wrote his own ads, and actually mailed the books out himself when he first started selling them. Far too many people wait for things to happen to them before acting. Karbo took action and did it himself.

Karbo’s book made him millions. It never would have had he not taken action.

This ad is legendary and is one of the best pieces of copywriting ever produced. Karbo’s ad provides lessons in sales that, if followed, can make an enormous difference in anyone’s sales career.

Click here to read more of such interesting articles from our CEO A. Harrison Barnes.

Mid-size Cleveland law firm is seeking a Patent Attorney with a minimum of two y...

Beverly Hills office of our client seeks a junior associate attorney with experi...